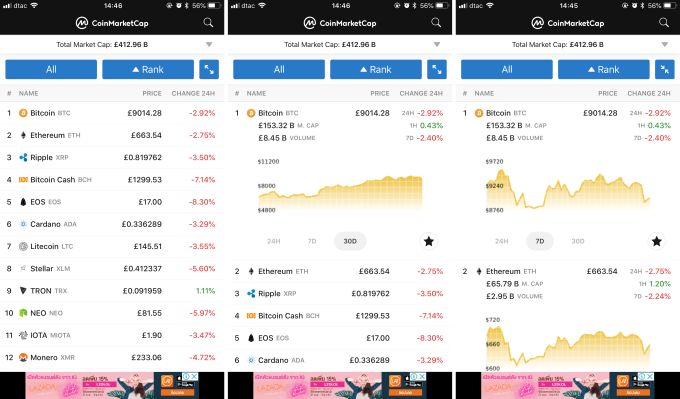 CoinMarketCap is a highly popular cryptocurrency market data website that did have one problem: no real mobile access was available through a mobile application. This recently changed thanks to the release of its mobile app.

After an official press release issued on Tuesday, users became aware of the availability of the app. Unfortunately, the mobile app will only be available through iOS devices. The launch of the CoinMarketCap app marks the website’s 5 years anniversary. The website currently lists prices for numerous tokens and crypto coins. It also presents trading volume data for some very popular exchanges. CoinMarketCap became a highly visited website in the past few months, being ranked at number 174 by Alexa.

The company issued the release in a Medium official post that can be seen here. Through it important information and stats were presented. According to CoinMarketCap, the website managed to reach an impressive 60 million unique views in the year 2018 alone, till the time the article was published.

The space has really evolved in the past five years and so have we. So we thought for this anniversary, it would be nice to do something big for our users.

The CoinMarketCap official app is now available on iTunes. It is free and does include ads. Ratings are really great for the application and it is expected that this is going to continue based on the responses that were already publicized by site visitors.

The interest in digital assets is constantly growing all around the world. Because of this, CoinMarketCap is faced with constantly increasing competition. For instance, Thomson Reuters, a highly established crypto data provider, recently added ether, bitcoin, bitcoin cash, XRP and litecoin to data offerings.

What Does The App Do?

Everything you imagine the app would do, it does. Users can easily sort based on coin market name, ranking, price percentage change or price. You can easily switch between the tokens or just create your own watchlist for the tokens you are following.

The app features one banner ad right at the bottom. You cannot pay for ad-free versions. Token prices can be tracked across 7 days, 30 days or 24 hours. You cannot track specific token numbers value so this is an app that will not replace the trackers.

What is interesting is that most crypto tracking apps now use the API developed by CoinMarketCap in order to show data. This is ironic since the company did not have an app before this iOS launch. Now the data service is looking at the brand new opportunities opened by the application.

A company spokesperson declared for TechCrunch:

Are there other places where people can get the data and do we have copycats? Sure. However, we are the only site that you can guarantee is sourcing, gathering, and verifying the data itself and we pride ourselves in being the first and best regarded within the industry.

There is also a clear monetization opportunity that is available. The website was redesigned and the API was upgraded to include historical data. At the moment the app launched is seen as a way to offer a better experience for the user while developing way beyond the level of a site that is monetizing advertising. Brandon Chez went on to say:

We keep our eyes on incoming requests from users, paying close attention to what people want to see and how they can get the most out of our data. We’re excited to deliver on many of those requests today.

BitTorrent Launches A New Cryptocurrency With The Tron Protocol